Last week has been spent refining the my first blocking. I decided to move from stepped to splined keys and started adding breakdowns. A bit too much I think because in some areas I ended animated on 1s already. A big mess in the graph editor again.
During that stage I also decided to reblock the second part of the animation ( the pull until the end ). I had some early feedbacks saying that my poses weren't strong enough so sadly, I had no other choice than to redo it.
I was also lucky this week to get an early feedback from my mentor. Awesome notes again. So much had been suggested to change, changes mainly focused on the timing of the shot. I was told that there are certain areas that are too smooth. That's a great thing to know about my work, and I'll be struggling against this weakness.


Hiding Stewie - Blocking plus pass from Krzysztof Boyoko on Vimeo.

Posted by Krzysztof Boyoko at 13:45 2 comments:

Posted by Krzysztof Boyoko at 16:14 No comments:

Email ThisBlogThis!Share to TwitterShare to FacebookShare to Pinterest
Labels: class 3

This first animation will be part of a 3 shot animation, where my character ( Agent Stewie ) is trying to hide from an unknown danger. Here is the planning of the shot. 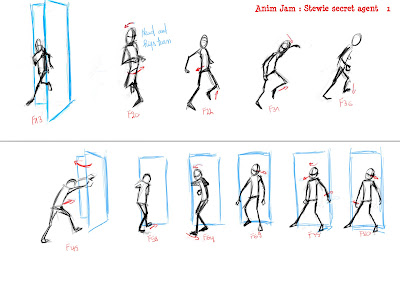 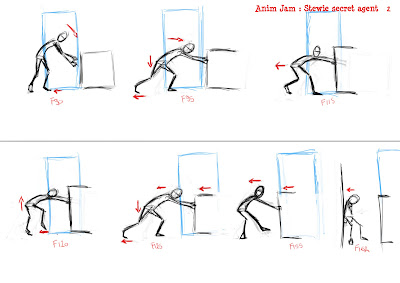 AM 301 video reference from Krzysztof Boyoko on Vimeo.

Posted by Krzysztof Boyoko at 08:21 No comments:

Email ThisBlogThis!Share to TwitterShare to FacebookShare to Pinterest
Labels: class 3

Happy new year to everybody!
It's been a while that I haven't posted anything. My days were kept busy trying to finalise my AM progress reel.
I've reworked most of my shots trying to apply everything that I've learned so far.
During this week I also started my third term at AM. I had the pleasure to see my new mentor, Josh Book
(another awesome mentor), as well as my new classmates. It's all looking full of fun for the days to come.

Posted by Krzysztof Boyoko at 15:57 No comments:

Krzysztof Boyoko
Hey there.I'm a 3d animator working at a video game company in Cambridge called Frontier Developments. I love telling stories, animation, movies, music, and everything in between